Croup is most common in the winter and early spring.

In most cases, croup sounds worse than it actually is and will clear up on its own within 5 to 7 days.

Antibiotics are not used to treat croup because it's caused by a virus and not a bacteria.

Croup is an infection of the throat and vocal cords (or larynx). It is caused by several viruses. When children younger than 5 years of age have the infection, it's called croup. In older children, it is called laryngitis.

How does croup spread?

Croup is most common in the winter and early spring. The virus spreads the same way as a common cold:

By touching the hands of someone who has the infection.

By touching something that has been touched by someone who has the infection.

By coming in contact with the virus in the air, after an infected person has coughed or sneezed.

What are the symptoms?

It often begins like a cold, but then develops into a fever and cough.

The lining of the throat and larynx (voice box) becomes red and swollen.

Your child's voice gets hoarse and he develops a cough that sounds like a bark. This is often worse at night.

Your child may have difficulty breathing, and it may be rapid and noisy.

Activity that increases the rate of breathing (even crying or excitement) could make your child sound worse.

Your child may become tired because of the extra work it takes to breathe.

What can parents do?

In most cases, croup sounds worse than it actually is and will clear up on its own within 5 to 7 days. In severe cases, your child's breathing can become difficult and she will have to be treated in hospital. Antibiotics are not used to treat croup because it's caused by a virus and not a bacteria.

Keep your child as calm and comfortable as possible and offer plenty of fluids.

Give acetaminophen or ibuprofen for fever. Ibuprophen should only be given if your child is drinking reasonably well. Do not give ibuprofen to babies under 6 months without first talking to your doctor.

Use a cool mist humidifier. Take your child outside if it is a cold day.

Do not give over-the-counter cough and cold medicines to children younger than 6 years old unless your doctor prescribes them. The only exception is medication used for fever.

If you give medication for fever, read the instructions carefully anddo not give more often than listed on the label.

See your doctor if symptoms continue or worsen. Your doctor might prescribe a corticosteroid (a medicine that helps to open the lungs) to help relieve the symptoms.

For cases of very mild croup, your child may continue attending a child care facility or school if she feels well enough to take part in the activities.

Talk to your doctor or go to the hospital if your child:

Has a fever for more than 72 hours or has a fever and is younger than 6 months..

Has rapid or difficult breathing, or bluish coloured lips.

Is drooling a lot

Is refusing to swallow because of a very sore throat.

Has a hard time lying down because it is hard to breathe.

Is lethargic (drowsy and listless).

A Chinese New Year's Gift for You All! 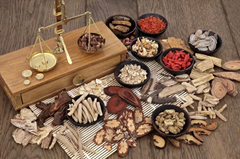 According to traditional Chinese medicine theories, it is be